Last Thursday Fish On Wheels was part of the Belgian TV show “Scheire en de Schepping“. The fish driving car was already recorded for the Discovery Channel and an interview appeared on BBC radio, but this was the first time the car was presented to a studio audience.

The show itself has some resemblance with the BBC’s program “QI” and is a mix of scientific questions, humor and interesting recent news items. Every episode features four TV personalities as contestants that have to score points by answering questions to be able to decide a winner in the finale. One of these rounds involves a guest that presents a certain invention. The contestants have to guess what the invention is, but the guest can only answer with yes, no or maybe.

In the ninth episode of the third season Thomas de Wolf of Studio diip presented Fish on Wheels, along with some other computer vision projects. You can watch the whole episode on YouTube or immediately see this specific part of the show below:

Right after we launched our “Fish on Wheels” all big tech-blogs started writing articles about it. After the tech-blogs, the normal news websites and even television shows followed. For days the “Fish on Wheels” movie was in the top 50 most watched movies on YouTube worldwide, with currently close to a million views on YouTube alone. A part of a Discovery Channel episode of Daily Planet was even recorded in our office. You can find the episode here on Discovery Channel (February 11th 2014).

Other shows about Fish on Wheels: 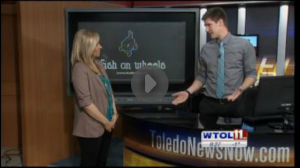